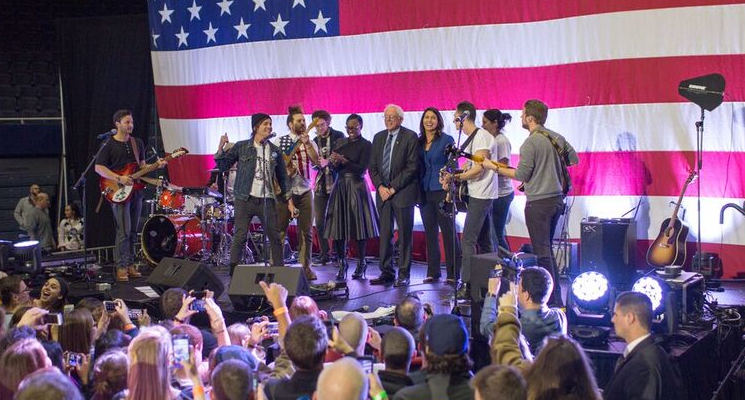 Getting the Party Started

Together with his fellow congressional progressives and campaign surrogates, Bernie Sanders can be the founder of our people’s party.

Bernie is already an independent and he plans on remaining one. All we need now is for other congressional progressives to switch their party affiliation in unison. For them to say, “Hey, let’s all join Bernie as progressive independents. And while we’re at it, let’s all be independents under the same banner.”

Imagine a founding convention and massive rally, broadcast to the country, where members could construct and sign the new platform. Next we place the platform online and open it to public signatures, as a huge national referendum for change.

Bernie could use his millions of progressive emails and vast social media reach to build the new party. His surrogates could tour America speaking to the real change that it represents. His supporters would set the internet ablaze making certain that the entire country knows about it within days and learns more with each passing day.

We stand shoulder-to-shoulder with our brothers and sisters on the picket lines and deploy to front line sites like the DAPL. We form state and local constituent branches that invite their Democratic and Republican members of Congress to debate the issues with us in town halls across the country.

The party would adhere to Bernie’s high standards of integrity and refuse donations from corporations, billionaires, super PACs and dark money groups. A party of, by and for the people.

In 2020, we run a presidential candidate. Our overwhelming majority on the left leads any remaining Democratic voters to join us in the general election. Our progressive populism demolishes the Republicans after four years of Trump, and sweeps in our down-ballot candidates in Congress and statehouses. After this election, our progressive party is the new left party in America. Our working class majority is left with a corporate authoritarian party as its only opposition. A 21st century progressive national consensus leads us into a future to believe in.