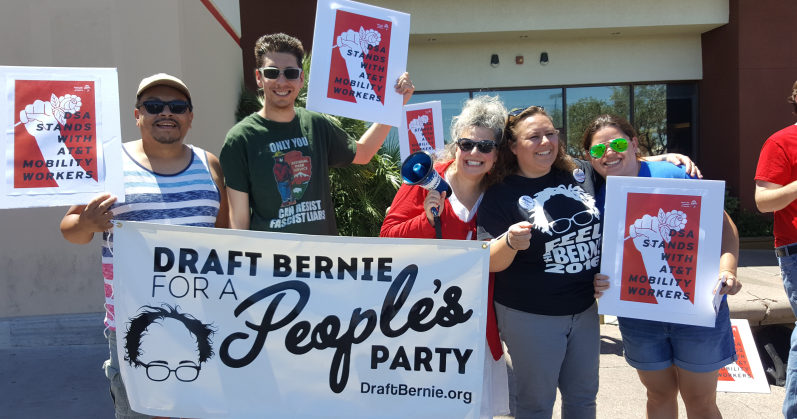 Our field program is a grassroots movement of many thousands of volunteers and supporters from across the country led by former Bernie campaign staff and supervolunteers.

This past November, Bernie campaign staffer Nick Brana wrote an article saying that Bernie has a unique opportunity to create a successful people’s party. The movement to Draft Bernie was born when hundreds responded to that article asking how they could volunteer to make a people’s party a reality.

We’ve come a long way since then. Our field team has state and regional leaders in 35 states, and volunteers in all 50 states and Washington D.C. Our volunteers are busy attending local progressive events, collecting petition signatures, and building alliances with fellow progressive organizations. It’s easy to join the team and start collecting signatures for Bernie. Our petition is available to sign online and printable petition sheets are available for canvassing with a clipboard.

We’ve joined our allies at events like the March for Science and Climate March and organized several successful days of action. Recently we led a Phone Bank Day, where supporters called Bernie’s office and asked him to start a people’s party. His staff said they had never received so many calls in a day! Later that week, Jane Sanders and Nina Turner showed solidarity by retweeting Draft Bernie.

We also held a Draft Card Day, where supporters across the country wrote personal letters to Bernie telling him why starting a people’s party is important to them. You can join the thousands who have mailed their draft cards to Bernie here.

All states are now hosting ‘Bernstorms’ to bring people’s party supporters together and recruit volunteers into the movement. If you missed out on the Barnstorms during the campaign, this is your chance to hang out with fellow Berners. If you attended a Barnstorm, then you know how much fun they are. Read our guide to hosting a successful Bernstorm and stay tuned for upcoming events, such as our Draft Bernie Days of Action.

Join Draft Bernie on a mission to build a people’s party and a government of, by, and for the people. The majority of Americans are progressive and want a major new party. Sign up to volunteer and join the movement that’s making it happen!